Marina Abramović defines performance (in her case this is the way she refers to what others might call “performance art”) as “just memory.”  In this simple explanation of the difference between her work and that of a world she sees as overly consumer and product oriented, she jump starts a discussion about the nature of the arts, the way we commodify and classify works we see, and how environmental/sociopolitical/commercial factors define the arts itself.

Welcome to the Middle Spaces: Emerging Forms of Art, Episode 1

As artistic, commercial, political, and cultural collides in the 21st century, a movement is afoot across almost every established art form to explore the areas that exist between what we already know.  The result, if successful (we’ll talk about how we might define that later) this could result in brand spanking new areas of performance and a redefinition of form, creation of new vocabularies, merging or expanding or development of markets, new pathways of education and research, and generally a huge headache to the status quo. Or maybe some relief.  Whatever the case may be, the evidence is all around us and this Beat Blog intends to document, question, and share the ideas and experiments taking place.

How do we talk about things that don’t have a tradition or formal vocabulary yet?

Some questions to think about as we explore the middle spaces:

1. Can we draw any corollaries to established forms? What’s the evolution story?

2. Who and why are these forms being attempted? Necessity? Exploration?

3. How are they being received by audiences? By producers? By other artists? By critics?

4. Where are these art forms being created, presented, and produced? Why?

5. How are these performances being funded?

6. What are the chances this form will transition from “emerging” to “established?”

7. Are there features that begin to define the Middle Space Arts?

8. Do I like it? (My opinion is pretty important, obviously)

Let’s wrap up this initial blog with a thought about how the literal Middle Space might influence this trend.  The Tate Modern in London is opening a new space for art/performance/whatever carved from old fuel tanks used to power the turbines of the old power station The Tate inhabits.  Large, cavernous, dark, industrial, and brutal, these spaces are not what most would consider tradition art museum spaces.  And The Tate likes it like that.  They want to use the space as a place for new and different works that challenge the concepts of what a museum, and art, can look like.  If many of the pieces presented are site-specific or adapted to the space, a few questions come to mind:

Does the site in which art takes place help define the form? Or challenge it? Or create new? 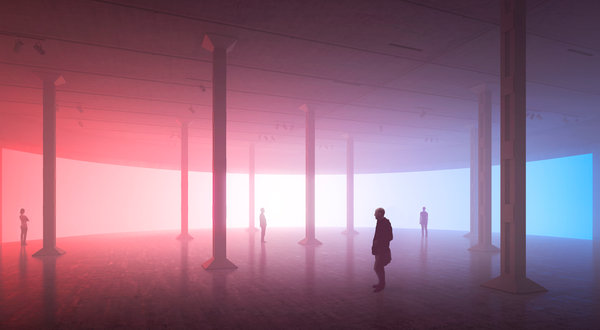 My quick answer: Gosh, I hope so!  The longer one: One of the main trends we’ll see in Middle Spaces is that the site in which the new art forms are being performed is rarely recognizable as a traditional venue.  Whether through choice, alteration, or absence of the space, form is dictating function (and vice versa) in a way that forces us to begin our experience with the performance from a place of being challenged.

I’ll leave you with this…

This preview video from the Guardian’s art coverage does a great job of showing you how people might interact with new forms of art in the space.